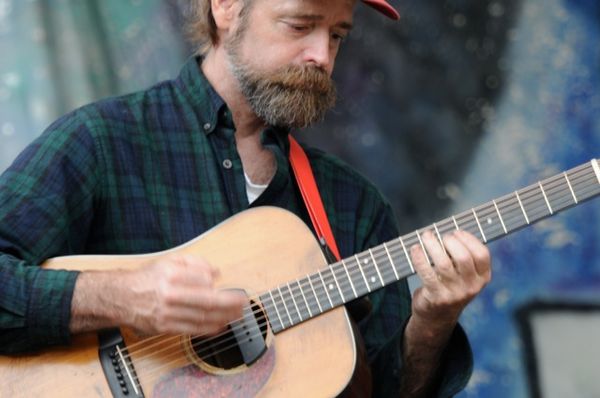 Doug Perkins of Washington, Vermont is a virtuosic acoustic guitar player, whose high octane chops have enlivened many of Vermont’s most popular bands, over his several decades as a working musician in the state. His powerful and subtly expressive technique and composing in diverse genres including jazz, bluegrass and classical, was recently recognized for its excellence when his first solo effort Music for Flat-top Guitar on Thunder Ridge Records was designated “Best Instrumental Album” of 2012 by the Barre-Montpelier Times Argus. Doug is an unparalleled master of the steel string guitar and has brought the instrument into a new relationship with modern styles of music.

Doug is also well known regionally for his collaboration with mandolin player Jamie Masefield of the Jazz Mandolin Project. Having performed together for 15 years in the Northeast, this dynamic duo performs in an original, intuitive manner that sets itself apart from Nashville and West Coast styles. They are frequently joined by bassist Tyler Bolles and, for added punch, Phish drummer Jon Fishman. Their repertoire typically includes pieces from the likes of Django Reinhardt, Bill Monroe, Miles Davis and Antonio Jobim blended seamlessly with performances of their own jazz-grass compositions.

One of Doug’s newest and most exciting musical projects brings Doug together with fiddler Patrick Ross, mandolin player Matt Schragg and stand-up bassist Pat Melvin. Hot Flannel draws from the acoustic side of Appalachian music, with hints of gypsy, swing and folk songs, and a focus on the instrumental abilities of each player. One fan put it this way:

“Last night's show at the Rialto was amazing. Hot Flannel was burning up the stage. Lots of foot-stompin' from the audience (impossible NOT to). These guys were so tight, you'd think they had been playing together, daily, for months. We, here in the North Country, are truly blessed to be able to witness such talent. Don't ever pass up a chance to hear these guys!”